Pulling anchor at first light about 5:30 am, we cruised uneventfully 10 or so hours to St. Martin/Sint Maarten, a tiny island located at the northern tip of the Leeward Islands.  The 37 miles of land are both Dutch (Sint Maarten) and French (St. Martin), both with their own language, currency and customs.


History says that after all those centuries of fighting here on the islands (all those countries again & the pirates), the Spanish troops left, taking all the French and Dutch prisoners with them, except for 10 who escaped.  These 10 stayed and soon more and more French and Dutch arrived, making peace, not war.  Legend has it that the border was determined by a walking race between a Dutchman and a Frenchman - walking in opposite directions around the island until they met.  The Dutch ended up with 16 square miles because the Dutchman kept stopping for a drink.  The French got the majority of the island - all 21 square miles.  Today 37,000 live on the Dutch side and 30,000 on the French side, with tourism as the means of support for all - this is a TAX FREE DUTY FREE port.

Making the turn to enter closer to the entrance of St. Martin on the Dutch side, we were hailed by Scott aboard RASMUS, who heard us on the VHF trying to reach the bridge official.     Our plan had been to anchor outside the Lagoon based on our friend, the Brit’s advice.   I’d also just determined that the fees to enter Simpson’s Bay & the Immigration/Customs fees would be $120 for our boat - an outrageous amount!

It seems the Dutch want to pay off the cost of that new blue drawbridge they built, sticking it to those using the bridge.  A side note, anyone can pay $1,000 and the bridge will open for them off schedule!!  Phew - a drop in the bottomless bucket if one has one of these mega yachts.


It did not take us 5 minutes on the hook, bouncing and rolling outside of the Lagoon to decide NO WAY we wanted to stay there for a few days.  Nor did we want to partake in what would be very long, wet dingy rides into the Lagoon where all the stores, restaurants and activities were.  We especially did not want to have to do that after dark!   Sliding through the narrow bridge into the lagoon at the 5:30 PM opening, we found a spot and settled in.   A side note:  Checking in the next day, we learned the fees had been reduced greatly to be in the Lagoon and use the bridge.  We paid about $60, which is still far higher than checking into most other islands. 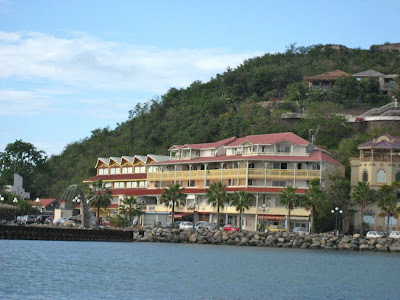 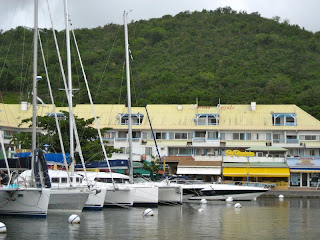 Brittany & Scott were waiting for us and off we went for a few days of sightseeing on both the Dutch and French sides, eating and drinking our way through the many fun places.

The rain and drizzle continue but are not stopping us from exploring.  Our first impression was “Wow - we could spend the winter here”.  Well, after exploring for a couple of days, maybe NOT.  We are not into spending $$ on designer bags, clothes or jewelry - even duty free.  In fairness to the island, however, we will come back and explore via auto next time to get a better flavor of it all and to see all the mega yachts that will be docked here by December.  We are here ‘off season’ with very few tourists about.  We are told that by mid-November through March every place is PACKED, marinas are booked solid with mega yachts of the rich and famous and one could walk boat to boat across the anchorage.

A favorite place we visited on the Dutch side was Jimbo’s, a lush garden like place with a swimming pool around the bar located in the center of a shopping complex, Plaza del Lago located behind the tiny Isle del Sol, or also known as Snoopy Island, in Simpson Bay.    We might have worn out our welcome, spending several hours sipping water and later Margaritas and Nachos as we caught up on our email via the free wifi and avoiding the latest downpour outside. 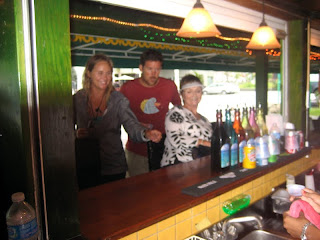 Climbing onto a bar stool with help as my butt and back hurt, we were greeted by the owner, Topper, who happened to be there....a delightful, interesting gentleman from Chicago who owns restaurants around the world.


We spent an hour or so enthralled he regaled us with stories and shared with us the rums he produces
on the island.   We tasted at least 6 different ones, all sweet, but good.

The walls are lined with photos of the rich and famous and Topper tells us the restaurant is always packed solid during the season.  He has another restaurant in Simpson Bay from which he produces first class theatre, complete with elaborate costumes and local talent.  For the price of a meal, you get to see the play.  We plan to do this upon our return this winter.  In case I lose the business cards, Topper’s two restaurants are:  Topper’s at Flamingo Beach Resort @ 6 Billy Folly Road and at 113 Welfare Road, next to Dolphin Casino.  I forget which is which, but can find them on foot.


Ah, the wonderful French side for it's bakery and its restaurants!  So great tasting...a real treat, including the gellato ice cream.

May 22, 2011  Sunday
Six days after dropping anchor in St. Martin, weather finally was good enough to depart.  Cruising seven hours from here to Ballast Bay anchorage on St.Kitts, under fairly clear skies and puffy clouds.  We were thrilled to see the sun for the first time since departing Puerto Rico ten days ago but could barely keep our eyes open half the time as we gently bobbed up and down in the waves and warm sun.   We are flying the Q flag as we are not getting off the boat, planning to pull out early tomorrow morning.  St. Kitts and its sister island, Nevis, are both large with lots to see and do....on our return trip.  In the interim, given our schedule, we are chugging along.

The guide book calls the islands strung out for the next 90 miles along the sea, “The Islands that Brush the Clouds”.   Saba, St. Eustatius or Statia, St. Christopher, commonly known as St. Kitts, Nevis, Redonda & Montserrat are small, lush, green, volcanic islands that rise straight out of the water,  touching the clouds overhead.  St. Kitts is the highest, at 4,000 feet.  One’s goal should be to explore each island on land - something we will have to do on the return trip.  God, our list of places to see and things to do is getting so LONG for our return trip!  Saba & Statia are Dutch; St. Kitts & Nevis - sister islands - are their own independent nation & Montserrat is British.

We carefully picked our way beside a long reef that sticks out from the point, dropping our anchor in a well protected, large cove in Ballast Bay, St. Kitts.  We love it when we are one of the first into an anchorage & can pick our spot easily without threading our way around other boats hunting for a spot not to close to others.   Shortly after we’d settled in, putting out nearly 200 feet of chain, about 8 more boats came in, one after the other, for the evening.
Posted by Sharon Fellows Larrison Stepniewski at 10:05 PM

Sharon Fellows Larrison Stepniewski
I learned to pack before I learned to walk. The daughter and later the wife of military men, living in new places every year or so was 'normal'. Later, my own career became one of numerous moves and travel. This life of living & traveling in various places around the world was stimulating & whetted my appetite for more of the same. The love of the water and of the outdoors, combined with my upbringing and wanderlust personality brought me to this live aboard dream. Retiring as a VP of Sales for a sales division of Novartis Pharmaceuticals Corporation and finished with full time mothering of 3 daughters and 3 stepchildren, the name FINALLY FUN says it all! I enjoy sharing my love of the water and this lifestyle with the our nine grandchildren, all our children and friends.

Born in Grodno, Poland, Andrew Zbigniew Stepniewski, also began traveling as an infant. His Mother, in an effort to save him from the invading Russians during WWII, smuggled him in a suitcase as she was forced to board a cattle train to Siberia along with the other villagers. He remained hidden from the Russians for many months as she & the others were forced to work the coal mines. Eventually he and his Mother were able to leave Russia along with many other Poles, becoming citizens without a country. After living in Jerusuleum & then London for a number of years, Andy emigrated to the United States in 9th grade.

Retiring as a Lt. Colonel in the USAF after 24 years moving around the world and finally retiring for good from various private corporations, Andy bought into the living aboard dream with Sharon. His skills as an Air Force navigator have made much of this cruising dream possible.

The father of twin boys and a daughter and stepfather to Sharon's three girls, he delights in the family and the seven grandchildren they have together.


With no scheduled end date and destinations yet to be determined, the expression, "Round and Round She Goes and Where She Stops, Nobody Knows" is an apt description of what is to come.

Currently making our way slowly back UP the Caribbean Island chain, stopping at each island we passed by on the way down to Grenada. Given the Christmas Winds, the winter time squalls and bad weather, we'll take our time. We won't head out of the USVI area until at least April, given the weather. Our goal is to be in St. Petersburg, Florida, by June 1, 2011.

This travel blog is written not to bore you nor to focus on ourselves, but so that our children, grandchildren, Mother, brothers, sisters, and numerous friends and family can keep up with us no matter our whereabouts and to also provide a record of our activities and our thoughts that will allow for many wonderful memories in the years to come. Tune in as you wish - check to see if we are still alive and well - or check to see if we are cruising in an area you want to know more about.

A portion of this blog - much of our Caribbean Adventures - was written for one very special group of middle school students in Clearwater, FL whose teacher is my daughter. You'll notice some Q&A in those portions of the blog that led to some great classroom discussions.